This groupmuse happened on Wednesday, November 7, at 7:30 PM.

A Night Out with the Greatest Fugue

A Groupmuse Night Out with Friends of Chamber Music

Denver's Friends of Chamber Music works hard to bring the best and brightest in the world of chamber music through your great city, and on November 7th, they've got a real bright act coming to town and they want our community to join for a Groupmuse Night Out!

It's the award-winning Calidore String Quartet with a program of Haydn, Mendelssohn, Osvaldo Golijov, and, most particularly, Beethoven's Quartet in B-flat major, Op. 130 with Grosse Fugue Op. 133.

Now. If you’ll indulge me for a second... Beethoven’s Große Fuge holds a singular and legendary place in the life of Groupmuse: 10 years ago, Groupmuse Founder/CEO Sam, when Groupmuse wasn’t yet a twinkle in his eye, happened to hear this piece of music in the basement of a neighbor. It was the first piece of classical music he’d ever seriously listened to, and it’s gnarled, fevered enormity so obliterated all of the preconceptions he’d brought to classical music - preconceptions largely born of luxury car commercials and films about European royalty - that he had no choice but to start Groupmuse some four years later. I mean, some stuff happened in the meanwhile - like he listened to the Große Fuge easily over five hundred times - but that’s the general gist of it.

And so, it's with great excitement that we present our Denver community the opportunity to experience the entire op. 130 string quartet + the Große Fuge -- just like Beethoven originally intended*. In its totality, this piece is truly one of the most astonishing aesthetic achievements the Western World can lay claim to.

Tickets typically cost $40, but we've got a stack for you for only $10 -- fully 75% off. That's a whole lot of genius for a single Hamilton, and we hope you have a transformational good time.

*When he originally wrote his op. 130 string quartet at the end of his life and deaf as a stone, Beethoven included this fabled fugue as the finale movement. But it was so thorny, so celestial, so ahead of its time, that his fans, supporters, and friends pressured him to remove and replace it. Somewhat uncharacteristically, Beethoven acquiesced, writing another, perfectly brilliant finale in its place and released the fugue as a stand-
alone opus - op. 133. The fugue is now hailed as a singular masterpiece, arguably the greatest and most visionary piece of all time. 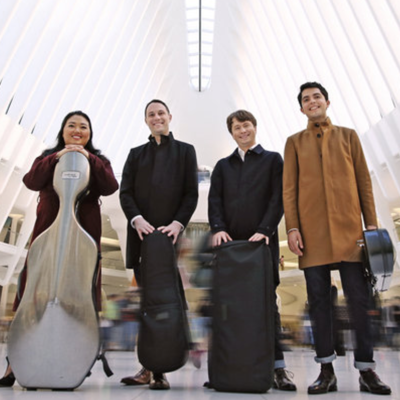 All Beethoven all the time with the Danish String Quartet