This groupmuse happened on Thursday, February 28, at 7:30 PM EST.

Bohemian National Hall is one of the true architectural treasures of our stunning city. It stands as a monument to the role that Bohemia has played in world culture and as a space to celebrate that culture.

And. We're so humbled to declare. On the night of February 28th. It’s all ours. So bring your own beer, bring a blanket to get cozy, and let’s Massivemuse in the Grand Style!

The Dvořák American Heritage Association is making it all happen. They’ve brought together The Momenta Quartet, one of the most celebrated string quartets of our generation, to feast - starting with the 6th String Quartet by Alois Hába, a great musical mind from the mid-20th Century whose pioneering efforts in microtonal music were suppressed by the Communist regime he was living under. Now’s the time to drink his genius in.

Next, it’ll be another microtonal work by Carl C. Bettendorf, Il y a l'Océan for string quartet who is not only living, but will be living and breathing among us, as he joins for the Massivemuse! And he’ll even take some time to explore the contours of his work.

The finale is the 500 pound gorilla of Czech Modernism: Leoš Janáček, and his absolutely staggering 2nd String Quartet, Intimate Letters. In the humble opinion of this even humbler copy writer, it’s the greatest string quartet of the 20th Century.

Tickets are $20, and, again, we’re are going to get SO cozy in this impossibly grand and beautiful hall, so bring your blankets, your pillows, your booze, and let’s Massive. 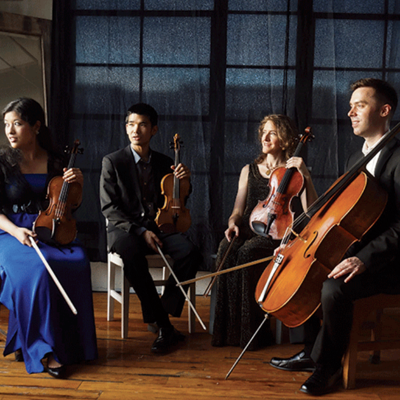 From Vivaldi to Bartok: Everything for Violin and Piano