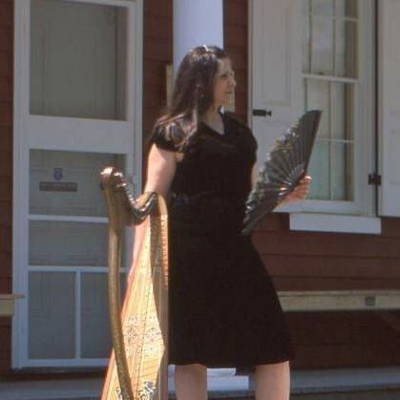 Mia Theodoratus is a composer, improviser and harpist. Her goal is to express life through the harp using classical technique infused with the dynamics of free bop and the rhythm/feel of rock. She has a MFA in harp/world music from California Institute of the Arts.

Below is a bio. Right now I have fallen in love (again) with classical music and would love to start with small concerts.

When Mia moved to NYC she joined formed Vardo with singer Dawn McCarthy and began playing in clubs like CBGB's, Coney Island High, the Cooler and the Mercury Lounge with radio shows on WFMU and WKCR. Mia has composed music for the Flight of the Conchords on HBO, Rubicon on AMC and Million Dollar Listing on Bravo.

Her arrangements of rock songs for harp are driving, rhythmic and use a full sound scape of electronics. Current groups performing in NYC and around the world are Adam & Mia, NYC Harp Orchestra and as an Electric Avant Celtic duo with Michael Evans on percussion.

David O'Leary and Mia were invited to play for the Irish Prime Minister and President Obama by the House Speaker in March 2011.

Sounds of The Brownstown

A harp in the garden!