75 spots total
at this groupmuse

The evening will begin with a musical introduction by our founder and cellist John Redfield performing one of his favorite cello suites, by Gaspar Cassado. John attended Indiana University where his primary influence was legendary cellist Janos Starker. John is founder of both the Santa Monica Bay Music Foundation and the Santa Monica Conservatory of Music, host of the UpClose Concert Series bringing some of the finest musicians in Los Angeles to Santa Monica for a concert experience with a "Living Room Feel, Concert Hall Sound".

For the rest of the night, be prepared for an interactive and entertaining evening with HOCKET. Formed and based in Los Angeles, this young and exciting piano duo is breaking the boundaries of classical music around the world.

HOCKET is a cutting edge piano duo based in Los Angeles. Lauded as “brilliant” by Mark Swed in the Los Angeles Times and as an "adventurous young ensemble" by The New Yorker, members Sarah Gibson and Thomas Kotcheff are both pianist-composers dedicated to commissioning and performing contemporary music. They have performed in some of the most exciting festivals and venues across the country including The Bang on Can Summer Music Festival at MASS MoCA, MATA Festival in New York City, The Center for New Music in San Francisco, and the Carlsbad Music Festival. Together, they have premiered over one hundred chamber and solo works and have collaborated with the premier, new music ensembles Eighth Blackbird and the Bang on a Can All-Stars. HOCKET has received grants from the Presser Foundation and The Earle Brown Music Foundation and has been a selected artist in Firebird Ensemble's Outstanding Young Artists Initiative. HOCKET is a performing artist on the Schoenhut Piano Company Artist Roster.

Doors open at 7pm and the performance will start around 7:30pm. Bring your pillows and drinks to socialize with guests and musicians before the show and at intermission. 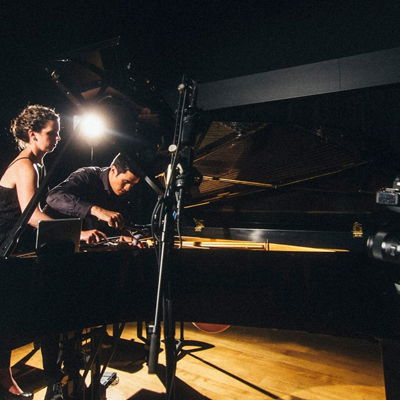 Two Greats and A Premier: Our LACO Night Out