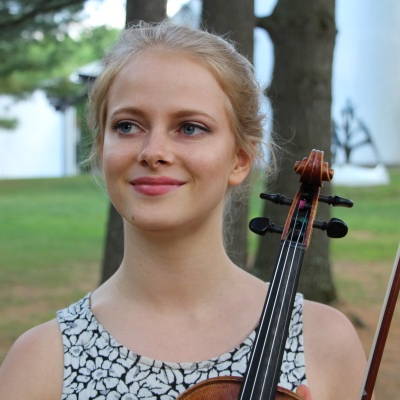 Originally from Powell River, British Columbia, Canada, I started playing violin at the age of 6. My introduction to the instrument was through a wide variety of genres, including celtic fiddle, gypsy, bluegrass, improvisatory jazz, classical, and folk. I also played chamber music and took piano lessons from a young age. In violin, chamber, and piano, I received recognition at several regional and provincial competitions, including the Powell River Festival of Performing Arts, the Kiwanis Music Festival of Vancouver, the Vancouver Friends of Chamber Music Competition, and the British Columbia Provincial Festival of Performing Arts. By the age of 14 I knew I wanted to pursue a career in music, and started to commute to Vancouver for weekly violin lessons with Mary Sokol-Brown, violinist in the Vancouver Symphony Orchestra and Trio Accord. I have since toured with the National Youth Orchestra of Canada, attended the Banff Masterclasses for Strings and Winds, participated in the Pacific Regional International Summer Music Academy, performed in the Saltspring Island Chamber Music Festival, and have had the privilege to work with many outstanding musicians on an international level. I am now in my Bachelor of Music degree at the San Francisco Conservatory of Music, and study violin with Ian Swensen. I play a wide range of solo repertoire, chamber music, string duos, and orchestral works, as well as dabbling in voice and piano.