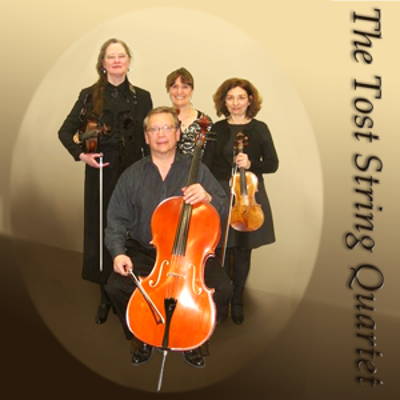 Formed in Toronto in 2010 by four friends with a mutual passion for exploring the string quartet literature, especially the works of Franz Joseph Haydn, the quartet is named after Johann Tost, to whom Haydn dedicated his frequently performed Opus 64 quartets. The Tost Quartet specializes in presenting music in intimate settings, bringing cheer to communities of those unable to get out to hear concerts in public performance spaces.

Catherine Sulem, violin
studied the violin at the Conservatoire de Nice and later went on to the Conservatoire National Superieur de Paris, where she graduated with first prizes in violin and chamber music. She has played many recitals in France, Germany and Canada and performed concertos with the French Radio Orchestras and the Israel Sinfonietta with whom she played as principal first violin for five years. Since her arrival in Toronto in 1990, she has been part of various chamber music groups and local orchestras including the Toronto Sinfonietta. Outside of music, Catherine works as a mathematician, and is a Professor at the University of Toronto.

Gretchen Paxson-Abberger, violin
holds a Bachelor Arts from Bennington College where she studied painting with Pat Adams, violin with Jacob Glick, and composition with Henry Brant. She received a Bachelor of Music degree from the Manhattan School of Music studying violin with Arianna Bronne, and Burton Kaplan. She earned her Masters degree in Baroque Violin with a full scholarship at the Mannes College of Music's Historical Performance Department studying with Nancy Wilson. Gretchen has performed and recorded with Tafelmusik, Opera Atelier in Toronto, Mendelssohn Choir, as well as with The Aulos Ensemble, ARTEK (Art of the Early Keyboard), and Rebel Baroque Orchestra in New York City. Gretchen lives with her family in Toronto, teaches at the North York Suzuki School of Music, and has been Artistic Director as well as a violin teacher at the Miles Nadal jcc Suzuki Program since 1999. She also directs a Suzuki Summer camp at the MNjcc.

Elizabeth Morris, viola
B.Mus(perf), originally from Edmonton, began studying the viola at age 12 in the Edmonton Public School System, continuing at University of Alberta, University of Western Ontario, the String Quartet Institute in Kingston, and the Banff School of Fine Arts. She is currently principal violist with Orchestra Toronto, Huronia Symphony (Barrie), the Peterborough Symphony as well as playing in the Tost String Quartet. As a freelance musician, she has played with many ensembles including the Kitchener-Waterloo Symphony, Talisker Players, Canadian Opera Company, the Royal Winnipeg and National Ballets, Stratford and Shaw Festivals and was principal violist for Livent's productions of Joseph and the Amazing Technicolor Dreamcoat, ShowBoat, Sunset Boulevard and Ragtime. Elizabeth is also active in the visual arts, creating watercolour and pencil crayon miniatures and original computer animations. An avid bread baker, she writes about it as well as humanitarian and environmental concerns in her popular "blog from OUR kitchen". She also maintains the website for Peacemakers Trust, the Canadian charitable organization for research and education in conflict transformation and peacebuilding.

Stephen Buck, violoncello
began serious cello studies at the age of 17. The following year he was accepted to the Performance Program at the University Of Toronto. Since then Steve has played chamber music with notable Canadian musicians as Geoff Nuttall, Erika Fromm, Mark Fewer, Martin Beaver, and Barry Shiffman. Steve has also served as principal cellist in a number of Orchestras including The Canadian Chamber Ensemble in Banff, The Royal Conservatory Orchestra, as well as local orchestras incuding Oshawa, Peterborough, North York, Etobicoke and Scarborough. In 1999 Steve created a Compact Disc entitled "Elegy" which was played on the radio across Canada. Besides performing, Steve has also enjoyed a 28 year career teaching high school music at Agincourt Collegiate in Scarborough.