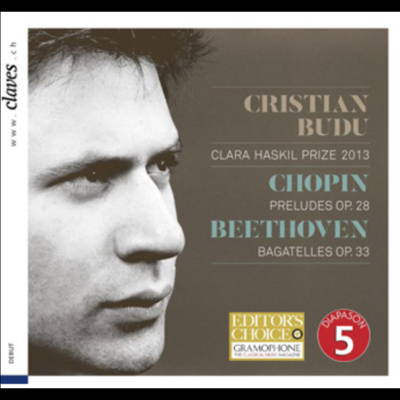 "A stunningly original pianist with musical insight and maturity that could inspire envy in colleagues twice his age." (Gramophone)

Young Brazilian with Romanian parents, pianist Cristian Budu became the winner of one of the most important and prestigious competitions in the world, the Clara Haskil International Piano Competition, at its 50th anniversary (2013). It awards just one winner by edition, and sometimes none at all (at the next edition the prize was not awarded). Beside the Grand Prize Cristian also won the Audience prize and the Children’s Corner prize. The critique considered this as the most important award on the part of a Brazilian pianist over the last 25 years.

Cristian’s first commercial solo CD launched in 2016 in Europe was awarded many important prizes: ‘Editor’s Choice’ by Gramophone, ‘5-Diapasons’ by Diapason, and by the end of 2017, this CD entered Gramophone's list of "Top 10 Chopin Recordings” and ”Top 10 Recent Beethoven Recordings”.