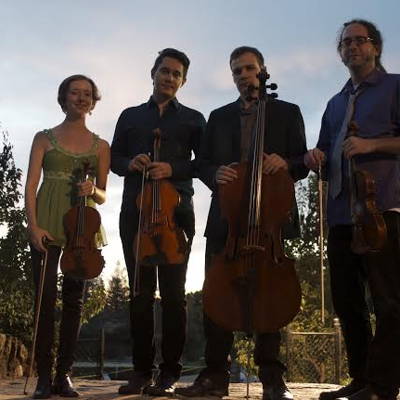 Send The Town Quartet a message

The Town Quartet was born in the Bay Area's town, Oakland, as a fusion of four musicians and their love for chamber music. Formed in 2011 by violinists Garrett McLean and Corey Mike, violist Jacob Hansen-Joseph, and cellist Lewis Patzner, the group added Mia Bella D'Augelli in September 2012 after Garrett migrated south to his homeland, Los Angeles.

Since its beginning, the Town Quartet has held a weekly Sunday afternoon residency at The Musical Offering Café in Berkeley. Performing in casual settings like this, as well as presenting formal concerts, has allowed us to voice our work with pieces from the 17th century to the present. Of course, rehearsing and performing as a solidified group goes beyond any sight-reading session, a feat all too rare for the gigging musician.

Collaboration is a central concept to any chamber ensemble, and the Town Quartet welcomes opportunities beyond the standard string quartet. This has included playing arias with members of Opera on Tap San Francisco and programming/performing a soundtrack to the Swedish silent film, Terje Vigen, at the Pacific Film Archive Theater in Berkeley.

Chamber music of the Town

The Town Quartet at a debut Groupmuse in Alameda