Our Next Nutty Massivemuse: (William Grant) Still Kicking: The Warp Trio Experience: Too Many Colons:

This is going to be nuts.

The Warp Trio are true heroes of the New York City Groupmuse scene.

Antonin Dvorak, on his sojourn to Iowa, tried to convince American composers and the public at large that we needed to rely on Native American folk music as the keystone of developing an “American sound.” He wrote his Symphony No. 9 “From the New World” while director of the National Conservatory of Music of America to give us some other ideas.

But America already was developing a sound, although it perhaps wasn’t ready to admit an American sound could be built on black musics. William Grant Still used his prodigious talent within Classical music, imbued with his lived experience as a Black American to create a voice all his own. We present his middle period work Poem for Orchestra.

New-York based Warp Trio (Joshua Henderson, Mikael Darmaine, Ju Young Lee) will premiere their genre-bending self-composed Triple Concerto for Piano Trio. With influences as diverse as Hip Hop, Classical and Raga, Warp Trio bends expectations and creates a sound all their own. This is their most expansive work today, employing full orchestra.

Some Tony Dvořák -- the first movement of his magisterial 9th Symphony, for a new world.

A new TRIPLE CONCERTO performed and written by the Warp Trio, backed by the Urban Playground Chamber Orchestra.

This is going to be nuts.

Founded in 2014, Urban Playground Chamber Orchestra's purpose is to collaborate anywhere, anytime, with anyone. An orchestra for the 21st century, Urban Playground is malleable in size, genre and venue, aiming to create engaging programming and push traditional boundaries through collaboration, performances of lesser known works and revitalized takes on classic works. We prioritize the music of African American and female composers to further enliven the classical canon. ﻿ 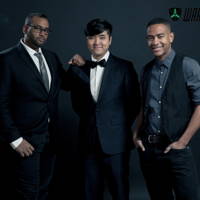